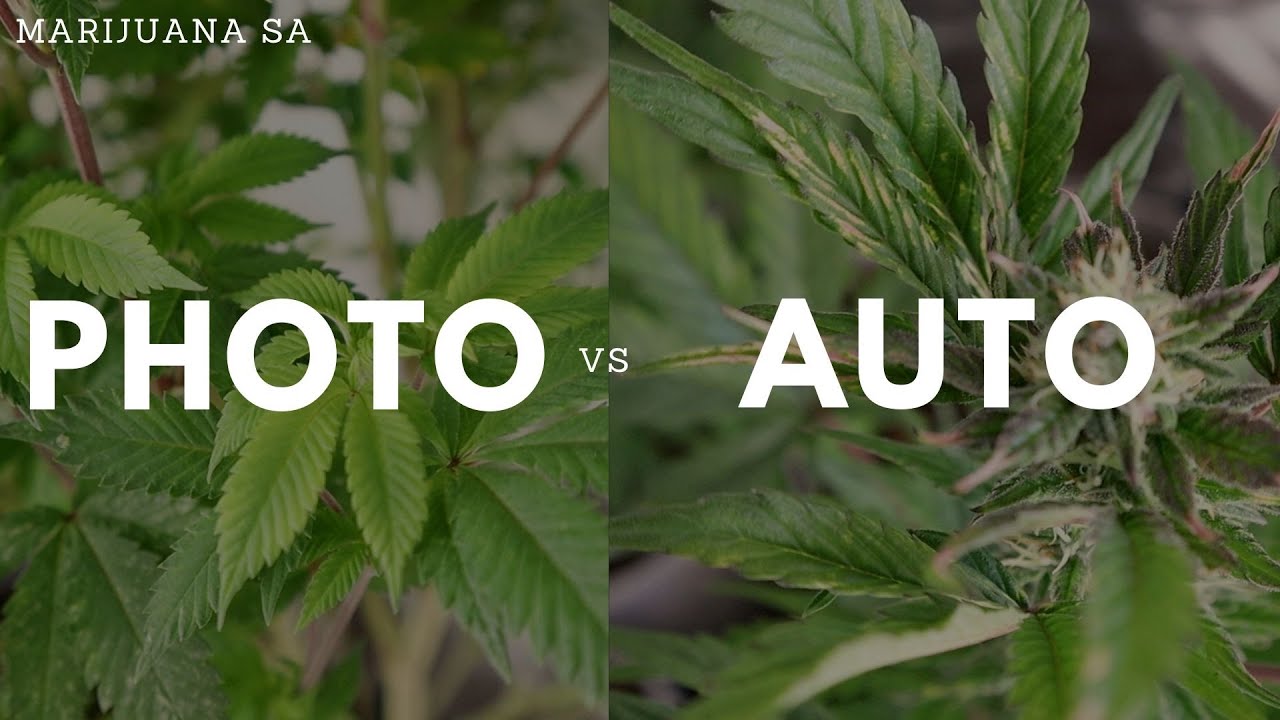 Andrew from Marijuana SA is an indoor autoflower grower, in this video he does a comparison on the two varieties of cannabis seeds, all seeds available on the Marijuana SA seedbank.

Autoflowers and photoperiods, a topic that has had growers splitting hairs for years. What exactly is the difference and appeal for each?

Autoflower varieties of cannabis were created when ruderalis genetics were bred with photoperiod indicas and sativas; a process likely to have occurred in nature before humans discovered it. This addition of ruderalis genetics meant that these new varieties would flower as soon as they reached maturity, instead of when the seasons changed. Due to these changes in growth they peaked the interest of growers worldwide.

Small home growers looking to maximize yields in the smallest area, as fast as possible tend to turn to autoflowers due to their physical characteristics and grow style. Photopersiod growers come out with bushy tall plants that veg till late summer where they start flowering or flower indoors once the lights are switch to 12/12.

A major difference between these varieties is their ability to be propagated through cloning. Cuttings of growth tips can be taken from photoperiods and rooted to produce genetically identical new generations. Autoflowers however cannot propagate through cuttings and must be grown from seed. Despite this, autoflowers are able to continuously rotate faster in a grow tent, growers are able to keep seedlings and flowering trees in the same environment.

Differences at a Glance

1) Seed to harvest 2-3 months
2) No.
3) Typically much smaller yields.
4) Easy- Intermediate.
5) Responds well to LTS but not toping, -FIMing or mainlining.
6) Lower yields but can be high in CBD

Autoflowering cultivars are advertised as being “easier” to grow. While they might not need as much maintenance and require less hours of light, they will still suffer without the correct nutrients, water, pH management and air flow. Autoflowers have short windows of growth, special care must be taken to not run into major issues like nutrient lockout; yields will be significantly effected as the life cycle of autos do not allow for recovery from these issues.

When we compare yields and quality, the general trend has been that autoflowers are less potent and produce less bud than their cousins. However, within recent years and with genetic improvements to the autoflower varieties we are starting to see much more potent autoflowers as well as growers growing these varieties into monsters. Growers wishing to grow photoperiodic plants short and flip them early are more likely to see shorter, smaller yielding trees which can match autoflowering life cycles.

With their major differences, one would assume that one is better than the other; this is however not the case. These different varieties offer growers with a choice and flexibility to their growing styles, suiting whatever they need. Growing both varieties offers a challenge and chance to expand a growers knowledge.