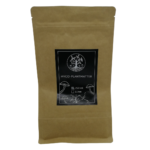 This product is locally sourced.

Pay over 3 EQUAL zero-interest instalments of R23.34 with PayJustNow.
Find out how...

MYCO-PLANTMATTER consists of Mycorrhizal fungi have existed since the first plants appeared on dry land more than 450 million years ago. They form a close symbiotic relationship with plant roots. They are called mycorrhizae from the Greek “mukés”, meaning fungus, and “rhiza,” meaning roots.

Mycorrhizal fungi which act as a secondary root system that draws both nutrients and moisture from the soil even helps protect your plant from root diseases and other soil pests. Mycorrhizal also benefits your soil by helping with aeration and moisture penetration.

Comparison picture where the soil on the right has been introduced to Myco Plantmatter. Not the extended consistent growth of the plant on the right.

Use in conjunction with a Plant Matter Grow Bag for best results.