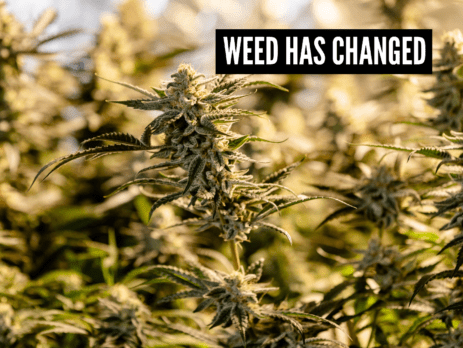 It is constantly evolving

We discovered cannabis resin from 2600 years go in China. Weed is not just some trendy new drug that the kids are using, but instead an integral part of our history that has been with us for thousands of years. It is a domesticated product that we have evolved with. We have changed cannabis and it has changed us.

The coolest part about weed is that it has not taken thousands of years to evolve, instead in the last 50 years humans have engineered marijuana into almost a completely new thing. Parents have been claiming for years that the stuff we have is stronger, and they are right! The trend is clear, all around the world weed has been getting stronger. In the USA it is nearly 3 times as strong as in the 90s.

To understand we can look to the USA who were arguably at the forefront of cannabis experimentation and popularization. Back in the day most of the weed consumed was from Mexico, who sold sticks, seeds, leaves and some flower; with an average of 2-3% Thc. But after a crack down production started in the States.

However back then all they has were sativa plants, meaning they could only grow in the warmer states. Then the game changed when they brought over the cold resistant Indica’s. Which they bred with Sativa’s to make hybrids, allowing the plant to be grown all over. They even became breeding with ruderalis which allowed to quicker flowering.

These days more and more countries are legalizing allowing for even more tinkering and innovation. We have things like oils, edibles and other wonderful things. We are even discovering the amazing health benefits that come from this plant. Marijuana has grown with us and i cannot wait to see what is in store for us in the future.