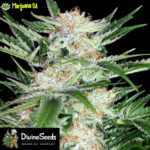 This Product has been retired.

Pay over 3 EQUAL zero-interest instalments of R150.00 with PayJustNow.
Find out how...

A classic hybrid, iconic for its name as well as effects. This genotype has not changed much since its creation in the 1990’s.

Original White Widow has an aroma similar to the rich earth it was grown in as well as ammonia and pine needles. The buds were extremely resinous, the resin producing characteristics originated from the Southern Indian Indica genetics. The ironically cerebrally as well as uplifting high came as a result of the Brazilian sativa genome.

Growers with less experience can look at this easy growing strain. The key is to let the roots get as much space as possible to allow stems to thicken up with the addition of Silica and fertile soils.

Grown outdoors, this sativa dominant hybrid produces large bushes with beautiful long leaves and aesthetically pleasing buds. When grown directly into the soil, or in a 50-100L pot or raised grow bed. From a 2-3m tall plant, you can easily expect 400-500g of premium, rock hard, resin covered and aromatic buds smelling of sweet fruits.

After the 10 weeks of flowering and a curing cycle. Expect a high that is worth the wait.

Described as, trippy, euphoric, unusual changes in colour perception, shapes and sounds are reported. Users that enjoy a sativa high know its energetic and creative benefits for any project, especially in the bedroom.

Seeds are for the sole purpose of genetic preservation. The cultivation of the seeds is not the intended use. We recommend that you do not expose the seeds to water in case / to prevent of accidental germination.