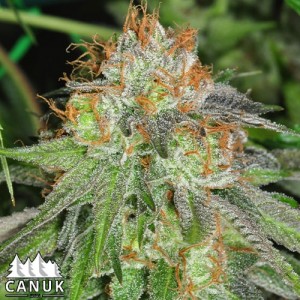 It’ll show you whose boss!

Grandaddy Bruce is the ungodly cross of Grandaddy Purple X Bruce Banner. These are two extremely potent strains that come together to form Grandaddy Bruce, a powerful strain containing the best characteristics of both its parents.

Grandaddy Bruce boasts an unbelievable THC content of 26%, making it one of the strongest strains that we stock. This strain really isn’t something to mess around with. I’m not saying it’s dangerous but it definitely isn’t something to introduce people to weed with. I was relaxed and calm but also kind of fuzzy and confused; in the best kind of way. I would recommend this strain to anyone feeling a little overwhelmed or stressed.

The taste of the bud is super sweet aromatic flavour ranging on something like lavender. It tasted almost how soap smells. The buds themselves are mesmeric with dark green leaves with a touch of purple contrasted against impossibly long orange hairs.

This strain has been said to be able to deal with chronic pain. Its effect is intoxicating and powerful showing potential for pain relief. It can also be used for muscle spasms and loss of appetite (like many indica’s).

If you keen to pick up some seed you an do so here!